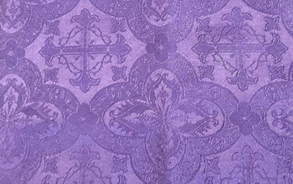 From the Rector's Desk

Dear Friends, Have you ever wondered about the colours on the altar which change during the seasons of the year? Specifically, why we have purple during Lent? If you think about it, all of our senses are (intentionally) engaged in church services - the sounds of music and words spoken; the taste and touch of the communion bread (also the touch of a peace greeting in non-pandemic times); the smell of the wood polish (and of incense in churches where it is used); and then our fifth sense, sight, as we cast our eyes on beautiful architecture, windows and adornments - including their colours.

The seasons of the church and their colours were developed well after the early years and have evolved over many centuries. The colours are meant to capture the mood of a season and evoke a response in us. In ancient times purple was one of the most expensive colours to manufacture. Quoting from the Smithsonian Magazine (Oct. 2013) “To make Tyrian purple, marine snails were collected by the thousands. They were then boiled for days in giant lead vats, producing a terrible odor. The snails, though, aren’t purple to begin with. The craftsmen were harvesting chemical precursors from the snails that, through heat and light, were transformed into the valuable dye.”  You may remember from grade school history class that the Phoenicians in the Middle East were especially adept in this process and became known for their manufacture of purple and other dyes. That was more than a thousand years before chemists learned to make synthetic dyes.

Since ancient purple dye was so expensive, it was owned and used by only the most wealthy and powerful. Thus it became the colour of royalty and aristocracy. When Jesus was mockingly hailed as “King of the Jews” by the Roman cohort, we are told in the gospels of Mark (ch.15) and John (ch.19) that he was  draped in a purple robe, much to their amusement - unknowingly ascribing to him the colour which actually denoted his true identity. Thus purple in Lent became a sign of both the sacrificial suffering of Jesus, and his divine royalty.

It is said that we each have a personal palette - the colours which make us look our best. We also each have our own favourite colours. I am most often dressed in blues and browns (my “uniform” as Diana calls it!)  In church world, colours are also a bit of a personal taste. For some people they are important in meaning and symbolism (as above.) For others they do nothing by way of inspiration. Either view is okay but next time you are looking at the colours in a church, it may be helpful to be attentive to whatever response they evoke in you. For the Spirit does use all of our senses to speak to us in diverse and creative ways.

With every blessing,
Alan This is the first video in the series with St. Mary’s elders.  Ann G W helped with the interview.  Please click HERE to view the video. ENJOY!!

This ministry requires almost no training.  What a great way to get to know our parishioners better.  Please call or email Pat N for more information.

Pat N is also coordinating a brief training session this Sunday April 3 after the service for the parishioners who have graciously signed up to help with coffee after church.