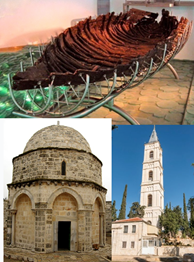 From the Rector's Desk

Today is Ascension Day.  When I was growing up it was always a public holiday and in many (mainly European) countries it still is, but not here! Although it’s regarded as one of the seven “principal” Christian feasts (along with Christmas, Epiphany, Easter, Pentecost, Trinity, All Saints) Ascension is perhaps the least widely observed, which is unfortunate since it really marks a crucial point in the biblical story of salvation - the moment when Jesus’ earthly ministry ended. I suppose the lower priority the Ascension is given may be because we struggle to understand precisely what and how it happened.

In Israel, just about every event in the gospels involving Jesus is marked by a church. Some are absolutely gorgeous (the Church of the Transfiguration on Mount Tabor, for example) while others are a bit cheesy shall we say!  When we visited the Holy Land in 2000, our tour stopped where a first century fishing boat was being restored - it had been discovered fairly well preserved in mud at the bottom of the Sea of Galilee. The tour guide said to us (a bit tongue-in-cheek) “when you go home, please do not refer to this as the ‘Jesus Boat’ because if you do they will come and build a church over it.”

For some events in the life of Jesus there are differing claims as to where they occurred, with competing sites and churches vying for recognition. For example there are at least two places claiming to be the site of Jesus’ baptism in the River Jordan; and in Jerusalem there are two sites for his tomb (with churches.) Then there is the Ascension.  Again there are different possibilities for its location - Jerusalem (Mark 16, Luke 24, Acts 1) or Galilee (Mark 16, Matthew 28.) So where to build a church commemorating the Ascension?  Well, there are at least three of them, located east of Jerusalem, near the Mount of Olives. There is also a church built on the north shore of the Sea of Galilee where according to John (ch 21) Jesus spent his last moments on earth with the disciples.

All of which points to that understandable human desire for certainty and preciseness of details.  What were the logistics of the Ascension? How did he ascend? Where to?  Some would say if we can better understand the locations and details of Jesus’ movements on earth, then we can better believe them.  On the contrary, the great 11th century theologian, Anselm of Canterbury, once said something like “I do not seek to understand so that I may believe; but I believe so that I may understand.”  In other words, focusing on physical details and locations does not increase our understanding, it really just has us chasing our theological tails in circles!

What we believe is that after his resurrection, Jesus commissioned his followers to continue his ministry on earth; and promised the forever presence of his Spirit with them - and, by extension, with us.  With that faith we are better able to understand what the New Testament writers were describing in their accounts of the Ascension - whichever historical church catches our fancy!

With every blessing,
Alan

Many of you may know KAT is off to the UK Tuesday June 14 and back on Tuesday July 19, 2022, to help her family move into their new house.  Alan is needing a volunteer to help out in the office on a Tuesday OR Thursday for about 2, 3 or 4 hours.  Answering the phone, checking emails, etc.  KAT will train you.

A very special thank you Marrianna for busting the blackberries on our grounds. And of course, Don and Harry for fixing the irrigation!

Is someone missing a church key marked #4?

It was found in the parking lot May 12.  Let KAT know in the office.