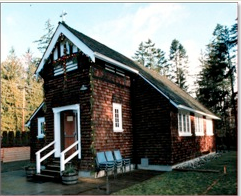 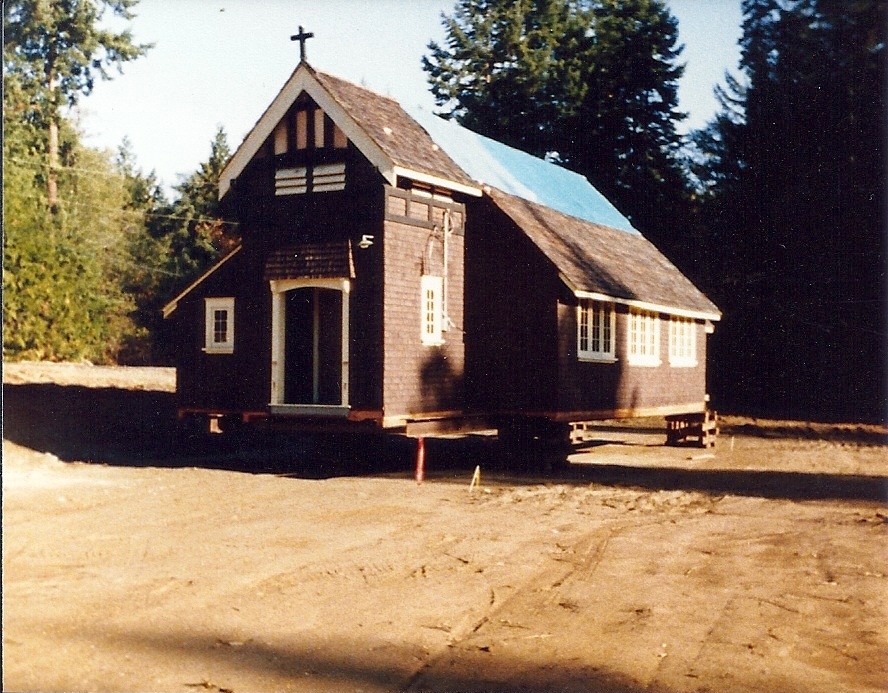 The original structure, which was built in Errington and opened in July 1926, was consecrated Saint Mary on March 25, 1928.  The church closed in 1974; reopened briefly in 1981 under Peter Parker; but closed again in early 1989.

In 1981 there had been a concerted effort to hold regular services in Nanoose Bay. LCol Jack Bagley set up an outdoor church with a large wooden cross and benches on his 7.5 acres on Powder Point Road. 1981-82 Peter Parker held services outdoors. 1982 first curate in Parksville, Brian Kirby, was given the duty to visit parishioners in Nanoose.

1984 Logan McMenamie (a theology student at that time and now our Bishop) canvassed Nanoose area to assess interest in hiring a mission priest and the Nanoose Parish was established under Diocese Mission Fund.  From 1984-89 The Rev Tony Essex was the first Priest-in-charge leading services in Errington at 9:30 AM and at Nanoose at 11 AM.  There was no official building in Nanoose, so the services were held first in the old community hall and then later in the Nanoose Library.

In June 1987, a committee was formed with the intention of raising sufficient funds to establish a church building and church hall for the use of a Sunday school and other religious activities to encourage the youth of the area to take part in cultural and religious education on the property donated by Jack Bagley at Powder Point Road, Nanoose Bay.

Rev. Huston was the first woman to serve in the Comox Deanery.  Her duties included Nanoose where she continued services in the Library.

June 1989 St. Mary’s Church building in Errington was handed over to the congregation at Nanoose Bay. November 2, 1989 the church building was physically moved to the present site on Powder Point Road.  The roof had to be removed to get under the power lines and then on December 17, 1989 Rev. Barbara Huston held the first service in St. Mary’s on Powder Point Road after the roof had been reattached and repaired. The foundation had been installed under the direction of Jim Bailey, one of the first of our parishioners.

January 14, 1990 St. Mary the Virgin was rededicated as Saint Mary, Nanoose Bay. May 1990 Dean Henderson was appointed the new curate at St. Anne’s / St. Edmund’s. Nanoose Bay was one of his responsibilities.

On January 18, 1993 Dean Henderson was inducted as the first Priest-in-Charge of the newly independent Parish of St. Mary, Nanoose Bay.

The church hall was moved from St. Edmund’s in Parksville onto the site in the spring of 1990. Once again Jim Bailey directed the installation of the foundation and the placement of the hall.

The Expansion of the Church Building

In 1999, plans were drawn up for an expansion of the little church from Errington which had a capacity of 75 people. By then there were over 200 people to be accommodated in the church at one time.

The narthex of the original church was removed, the building strengthened by placement of a steel arch surrounding the original wood frames and the new extension, designed by our architect Manley LeFoy of Parksville, was installed projecting into the parking lot. The pews in the original church were turned around from the old east facing altar, to the new altar at the west end of the extension.

Additional wooden pews were donated by St. John's Church, Cobble Hill, and the pews in the new section of the church were donated by the Pentecostal Camp in Nanoose Bay. These pews were refinished and recovered by our parishioners. Washrooms were installed in the wing projection towards Powder Point Road, the new entrance to the church was fitted in the wing projecting towards the Church Hall.  The whole building was upgraded to earthquake standards prevailing at the time. Island Hearing Services donated the equipment for a "loop" system to assist hearing impaired people with the appropriate type of hearing aid.

Pacific Shores donated plants and an advisory gardener to complete the gardens surrounding the Church. These are maintained today by volunteer parishioners.

This work was started in January 2000, and the first Service was held in the new building in May 2000. The contractor who completed this work for us was Rick Earl of Watercress Developments.

The Altar Window and the two Sanctuary Windows

The Rev. Canon Neil Robinson recommended that St. Mary's church invite Mary Filer, a respected and honoured artist for five decades, to submit a design for our windows. Mary Filer was a highly acclaimed glass artist. She was an educator, a muralist, a painter, a sculptor, a benefactor, a collector and an inspiration to her peers and generations of Canadian artists. She died in 2016.

Mary Filer created the beautiful coloured glass Altar window to enhance and enrich the enlarged and renovated worship area. The window has been made from laminated coloured glass, using a variety of types of antique and textured glass, embellished with sculptural surface treatment with pieces of thick plate glass and 'jewels'.

The forms she made are laminations of planar glass, clear and coloured. They attest to a long and deep absorption in painting and architecture; they reveal a unique grasp of spatial order; they assert vigorous, innovative creativity.

In her own words, she shared her thoughts on the design and the colours...

"The church’s saint is the Virgin Mary.
Her image creates spirituality, grace, glory and passion.
A certain fluidity in the shapes would be preferable to strictly geometric solution - which may be somewhat rigid and austere in expression.
The present design, nevertheless, is heraldic, and is a radiating focus of light at the top of the composition, then descending into the spiritual, meditative range of blues and purples - also colours of the idea of love and passion. The colours at the lower portion of the design lead the eyes and spirit upwards to the glow of a Heavenly vision, and bliss."

Both of the side windows featured below were designed and made by Mary Filer in 2007.

This window was created and donated by Mary Filer in memory of The Rev Neil Robinson. How fortunate we are at St. Mary's to be blessed by Mary Filer's gifts of artistry and inspiration in her creation of our Altar Windows. Her composition is beautiful and spiritual, and we give thanks to God for the gift of these windows which enhance our church and our worship in this place.